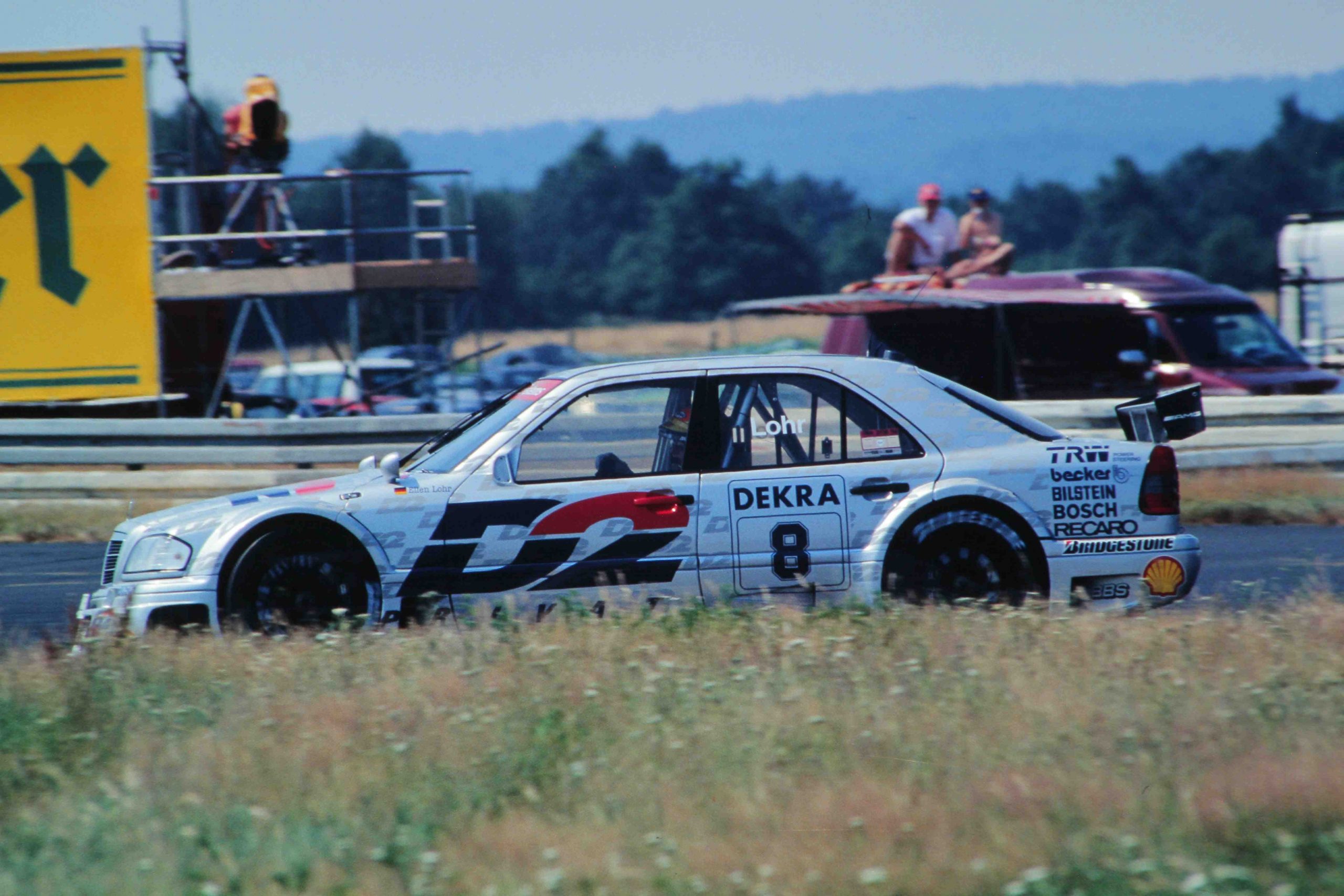 With a solo drive to victory at the Norisring on July 2, 2017, the AMG Mercedes-Benz C-Class, built 23 years earlier for the 1994 DTM, became the star in historic touring car racing. The man behind the steering wheel: Thorsten Stadler from Hannoversch-Münden, 47 years old at the time, a proven technology expert for classic automobiles with a star on the front bonnet. Three months and three days later, on October 7, 2017, he is driving his masterclass at the Hockenheimring: game, set and (overall) victory in historic touring car racing, just in front of his (sports driver) friend and teammate Jörg Hatscher. One year later, Thorsten Stadler repeated his triumph in the same place – a double success not only for him, but also for his prominent application, the original RS94-0205 chassis used by Ellen Lohr and Uwe Alzen. Restored to its original state and ready to race again, the touring car legend from Affalterbach is now for sale – a first-class investment for racing drivers, collectors and investors as well. Expert journalist Carsten Krome reports.

Way back in 1994, AMG-Mercedes-Benz changes models in the German Touring Car Championship. The reign of the 190 E in its four-valve version with 2.3 and 2.5 liter displacement lasts for seven years. After the market launch of the new C-Class in late summer 1993, the logical consequence is na refresh of the motorsport program. In the silver-gray sponsor look of the prospering mobile phone provider Mannesmann D2, the AMG works team relies on routine as well as on fast femininity. Klaus Ludwig, German Touring Car Champion on both the Ford Sierra RS 500 Cosworth 1988 and the AMG-Mercedes 190 E 2.5-16 Evo 1992, leads the AMG-Mercedes D2 private team. His start number: apparently the # 7 that was written down on him and had already accompanied him to the Porsche triumph with the Type 956 at the 24 Hours of Le Mans. With number # 8, Ellen Lohr joins in – the only woman who has won a DTM race: in 1992 in a duel with her then team-mate, former Formula 1 world champion Keijo „Keke“ Rosberg. The former chemistry student from Mönchengladbach receives the new car with the chassis number RS94-0205. With 76 points, the racing lady finishes eleventh in the DTM field in the final accounts. Your highlight of the season: third place in the second race on July 24, 1994 on the Diepholz airfield track. Ellen Lohr’s team mate Klaus Ludwig rushes to the third title win in the touring car Bundesliga with 222 championship points. On the sidelines of the glamorous DTM championship celebration at Schwetzingen Castle, AMG-founder Hans-Werner Aufrecht offends Ludwig after arriving late in his opinion. Ludwig then launches an agreement with Keke Rosberg, who now owns an Opel factory team in the DTM, and changes the brand on all roads after five years in the service of the Mercedes-Benz-star. Ellen Lohr also switches to another C-Class, which the traditional Eifel racing team Zakspeed has entrusted to her. Uwe Alzen receives her previous year’s car. The young talent from Betzdorf brings in its sponsor, the herb liqueur brand Kümmerling, into the new partnership. This enables the Westerwald’s native to at least be taken into account by all ongoing engine updates.

In 1995, Uwe Alzen competes in the AMG Mercedes Team Persson Motorsport with racing number #22. His AMG-Mercedes C-Class DTM with the chassis number RS94-0205 is now painted in Kümmerling green, but the fast pace of development in the DTM Class 1 is taking its toll. Alzen, who climbes in from the Mercedes 190 E 2.5-16 Evo class 1, encounters five lost races. The youngest offspring of the car recycler Dieter Alzen celebrates his very big appearance at the ADAC price on the Hockenheimring on October 16, the final race of the 1995 DTM season after: second place, squeezed out at the very last meters, behind his coach and friend Klaus Ludwig in the Opel Calibra V6 4 × 4. This performance earned him a works contract with Opel, and he remains loyal to the Rüsselsheim brand until the year 2000. It gets quiet about the AMG-Mercedes C-Class DTM, especially since Class 1 will be discontinued after the ITC season 1996. Then, however, on June 28, 2014, 20 years after the debut in the 1994 DTM, RS94-0205 reappears at the Norisring. The original evolution of the C-Class in DTM Class 1 has returned to the spotlight at the Norisring Race Classics. Thorsten Stadler is now sitting at the wheel. The expert for classic racing cars from the Mercedes-Benz brand already bought the car restored at Dawn Treader Performance in England in 2009 and finally put it into operation together with his own team of technicians at tst sport + technik in Hannoversch-Münden. The appearance of the 25 touring car legends is still a smooth driving behind the leading car of the race management, but just three years later this will have changed in the same place. A real 40-minute race will be held at the Norisring on July 2, 2017 – and Thorsten Stadler will win it in front of a large audience. For him, this is the cornerstone for the later title win that will appear on October 7, 2017, at the DMV Automobile Prize at the Hockenheimring: the maiden championship title win.

On October 14, 2018, the skilled seaman with the almost invulnerable nerve costume will repeat his masterpiece at the Hockenheimring. Following his double success, he takes the opportunity to switch to the AMG-Mercedes C-Class ITC with the latest development status from 1996. His previous chassis RS94-0205 has been on sale ever since – with first-class technical status, in the authentic livery of the 1994 DTM season, although without a spare parts package, but with the option of participating in the races of touring car legends with a full service package. The Swede Hans Hjelm will make use of this possibility for the first time on June 29, 2019 at Spa-Francorchamps, Belgium. Straight off the line – like Ellen Lohr and Uwe Alzen – he was on the podium right away: even a quarter of a century after its premiere on April 10, 1994, at the Bergischer Löwe on the Circuit Zolder in Belgium, it is still a guarantee of well-respected positions. The AMG-Mercedes C-Class DTM is a highlight of every automobile collection and therefore a particularly attractive investment in sustainable real assets. Inquiries can be made directly to the current owner, Thorsten Stadler:

Premiere at the Bergischer Löwen on the Circuit Zolder in Belgium, kick-off to the German Touring Car Championship 1994